The Co-production Network for Wales is a not for profit organisation that, for nearly ten years, has been supporting a community of practice around co-production in Wales and beyond.

We sat down for a chat with Noreen Blanluet, co-founder of the network about her experiences of supporting co-production and what she’s learnt along the way.

What does co-production mean?

We’ve got an official definition which is:

Co-production is an asset-based approach to public services that enables people providing and people receiving services to share power and responsibility, and to work together in equal, reciprocal and caring relationships. It creates opportunities for people to access support when they need it, and to contribute to social change.

Really what it boils down to is when people who provide a service are working with the people who are using that service, together.

We are not saying you have to do co-production for everything, with everyone, all the time. It’s about making sure that citizens’ voice is truly represented. And not just one person in a room full of professionals, but having enough diversity of voices of the different kinds of people whose lives are being touched by the decisions. So that people delivering services are able to understand people’s lives, and how they’re affected by the decisions they are making, and make better decisions as a result.

What is co-production and what is it not?

It’s not tokenistic – not having one person that’s supposed to speak on behalf of the entire county or everyone who has the same illness as them.

It’s not extractive – not asking people what they think and then taking it all away and making decisions on their behalf.

It’s about bringing the conversation upstream – before we decide what the problem is, let’s talk to people because they might have a different understanding of it. Rather than assuming professionals always know best it’s about making use of professional knowledge alongside what people know about their own lives.

What difference does co-production make?

It starts recognising people as people, not numbers in the system. Giving people an acknowledgement that ‘my voice matters’. When you give people that confidence who knows where it’s going to stop! But that’s the beauty of it, it doesn’t have to stop. Because the next step is recognising that we’ve got resources and can do stuff for ourselves. It’s lessening this tendency to look up to government for solutions and start looking sideways in our communities and to ourselves and what we can do. If we believe in people, and people believe in themselves, that stuff will start happening.

What is the Co-production Network for Wales?

The Co-production Network for Wales is an independent, not for profit organisation with origins going back to 2011. Our main purpose is to support a community of practice, of people who are interested in co-production, in all its forms, across all the different sectors of public services and the third sector. Mostly in Wales, but not exclusively.

We create a space for people to examine and share their practice and what they're learning,to share what's working and the challenges. And to actually come together – when you’re the co-production champion in an organisation it can feel a bit lonely, like you’re the only one speaking this language. So one of the most useful things is finding this community of people who have the same values and the same practice, and believe that co-production is a good way of responding to complexity. Along the edges of that we also provide advice, consultancy, training as paid for services, but to support people's evolving practice. 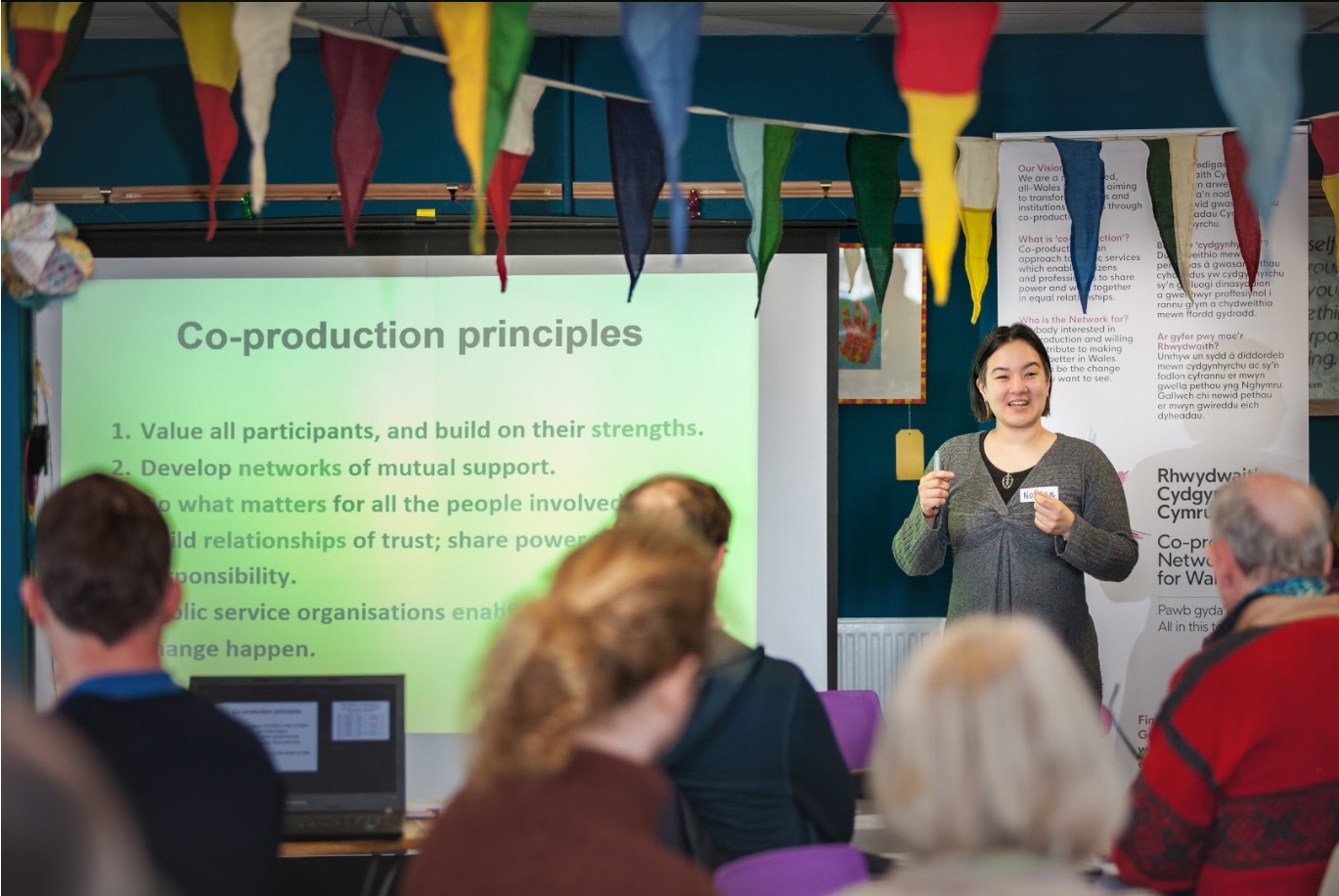 What’s had most impact for supporting co-production?

One thing that’s really helped is since about 2012/2013 there were bills developed in Wales that focus on co-production and citizen involvement. The fact that they exist in Wales has started the conversation about co-production and citizen involvement. That’s made our job a lot easier, because rather than trying to make people pay attention to this concept, it’s already in people’s consciousness. So we can jump to that conversation about what co-production is, and what it isn’t.

I think what’s helped co-production the most is having this critical mass of people who are doing it in their own ways. Experimenting and trying stuff out in different ways that suit their contexts, and then sharing stories of that. Having that community of practice so you can talk to other people about it, that’s the most powerful thing.

When people start on their co-production journey, the first step is: ‘What’s this co-production thing and what do I need to know?’. But even with a definition and theoretical understanding it’s hard to imagine what it would be like, because it’s such a leap in ways of operating. It’s a different way of showing up, and thinking about things. It’s a real values-based approach, so we can’t just give people a checklist of things to do.

That first time of doing co-production people need so much reassurance and validation; having peers who have done it and can advocate for it is really powerful. I worked with a Citizens Advice team who were really sceptical because their advice is so heavily regulated that they didn’t feel it could be co-produced. So we looked at all the things they could co-produce around that: the spaces they create, how they invite people in. So that when people come to get advice, all that stuff around it has made it easier and more comfortable. When the penny dropped for them it was just so lovely. They have learning networks between the different Citizens Advice offices, and a few of the team were responding to other people’s objections going: ‘That’s what we thought too, to begin with, but actually what we found was...’ They were just the best champions to spread the word because they’d been through it.

What helps organisations to ‘get it’?

The organisations that are doing co-production well have a really clear direction, buy-in and permission from the top. If you are in a very hierarchical organisation and you’ve got one person on the frontline who wants to be people-centred, they can only so much before they hit up against organisational structures and processes. There has to be a cultural shift within organisations so that the people on the front line are enabled and empowered to make the right decisions in the right moment, rather than having to go through huge chains of command. And they have to trust that someone has their back if something goes wrong and will treat this as a chance to learn rather than blaming them.

For example we talked to a housing association the other day who were helping someone with a huge clutter problem that was so bad it was becoming a risk to the building. They had a budget which meant they could just hire a container and move everything out, which stopped the floor caving in and gave them time to deal with the problem. If they’d had to go through layers of making decisions remotely it would have taken months. Let’s trust people to do a good job and give people flexibility to take action at the point it’s needed.

It’s like changing the wheels on a car while you’re still driving it.

From there you have to support the managers in the middle between senior executives and frontline delivery. They have to keep the organisations’ vital work going and make sure people don’t die or become homeless while going into a new way of working, and at the same time we can’t tell them exactly what that way of working will look like before they go into it. They’ll have a corporate strategy that says they have to do co-production, and people on the frontline saying: just take the stupid admin out of the way so we can work with people in a human way. So you have these managers pulling their hair out in the middle trying to figure out what this looks like and how to set it up. It’s like changing the wheels on a car while you’re still driving it. I have so much empathy for them, and they’re the people we work with the most.

Co-production means a change from being expected to have all the answers, to being able to stand in front of people and say: ‘I don’t have the solutions, can we figure it out together?’ That’s a big psychological process and I don’t think we give it enough room - yet. We need spaces for reflection and figuring out who we are and how we do this together.

What encourages citizens to get involved?

Don’t call it co-production. Who cares about the word? It’s jargon! Just do it. Show up, listen, be authentic, be transparent, and tell people what’s happened with the stuff you’ve asked about. Things change, but tell people when they change and just keep being transparent, authentic and treating people like people.

Look at your own prejudices as well, what do we think about the people we’re looking to have a conversation with? Get to know people, bring empathy to those conversations, and build relationships.

It doesn’t mean we’re going to agree with them, or give them everything they want; but that we’ll start by understanding where they’re at in their lives. Hopefully enabling them to understand where we’re at as organisations too – we shouldn’t ask people to be vulnerable and share their stories while we hide behind a façade of being a really official, even faceless, organisation.

People believe in us, build relationships with us, not the organisation that we represent. People won’t necessarily trust the council, but they’ll trust their councillor that they see in the market. So build those relationships and take it from there. For years we’ve expected people to meet us on our own terms and not met them where they are.

When is it best to use co-production?

I tend to think about it in terms of complexity. If you’re trying to do something that’s complicated and linear, like building a new hospital: you have to respect building regs, make sure the different contractors come in at the right point, and that kind of thing. You plan upfront and then you roll it out. You don’t want to co-produce that; you need specialists who know their trade.

But when you don’t have the answers, when it’s about people’s lives, when there are many factors at play, that’s when you can (and should!) co-produce with people. (Even if you’re building a hospital there is room for some co-production around the building process itself, because people are going to live in and use the space.) For complex issues like loneliness, substance misuse, and poverty (… even democracy!) that are about people’s lives more than they are about things: co-production is the best approach.

This is a summary of a conversation with Noreen. You can listen to the whole interview online.