We kicked off the event by asking the audience “What do you feel about artificial intelligence?” and here are some of the responses we got: 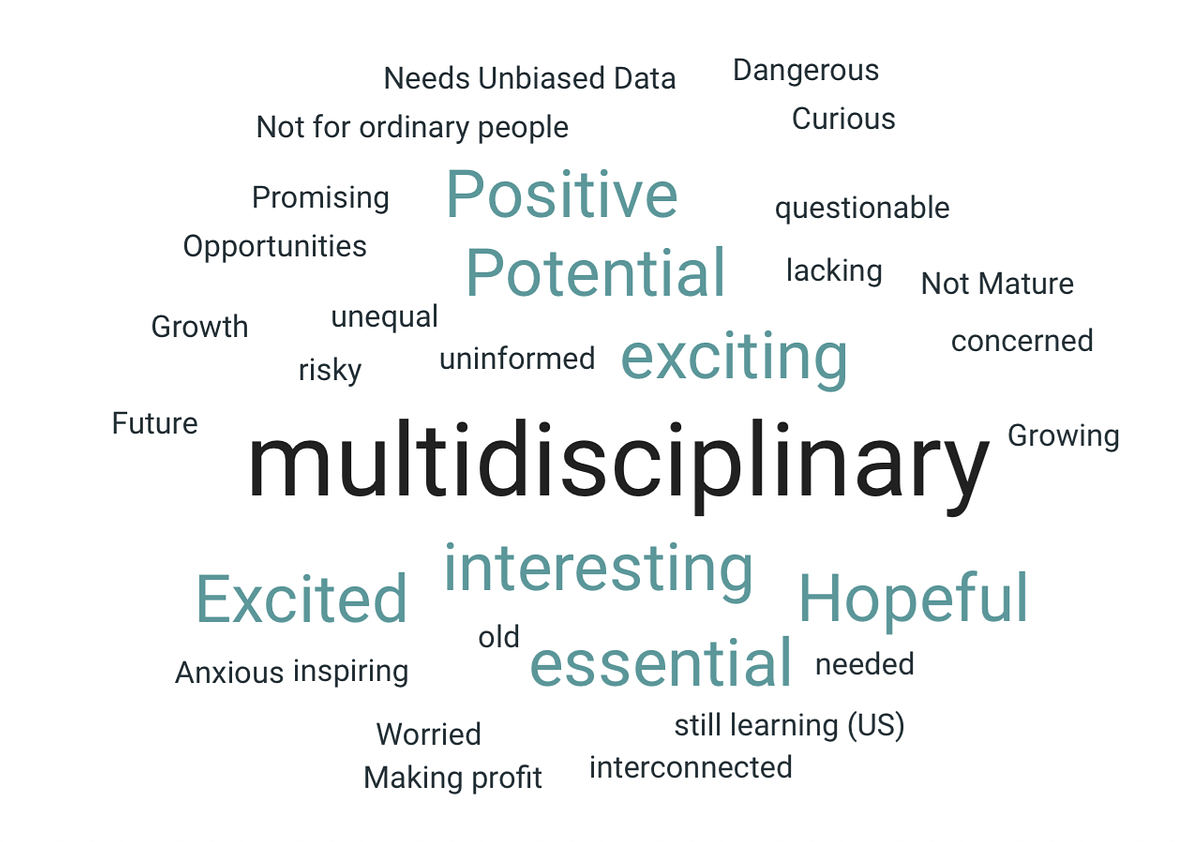 Well, we learned that AI is certainly not a Terminator narrative of robots taking over the world, as science fiction would sometimes have us believe. Rather, it is already intrinsic in the technology we use and the Scottish Government wants to know how they can optimise the technology to better society whilst minimising the risks of AI.

We welcomed Albert King, Chief Data Officer and member of Scotland’s AI Strategy Join the Dots Working Group and John Fotheringham, Data Policy Manager, who led on the Consultation work, both from the Scottish Government, Jennifer Russell from Anderson Solutions who led on facilitating all five of the working groups, and Namita Kambli from Democratic Society who led on research and capturing all the findings from the public engagement activities, to the event. The panel speakers offered deep insights into the work that they did. At the same time, the audience brought their own expertise and curiosity to question the panel speakers on topics ranging from AI and bias, AI in the corporate world, and AI in education, amongst others. There was an enthusiastic atmosphere in the live chat and the speakers received many insightful comments and challenging questions. Please note that the themes below are evidence collated from the development of Scotland’s AI Strategy but won’t necessarily all be adopted into the final Strategy.

“The Scottish Government wants citizens at the centre of AI”

Albert King, at the Scottish Government, emphasised the importance of building on current policies such as the ‘National Performance Framework’, which centres on improving the opportunities and wellbeing of the citizens of Scotland, whilst also maintaining sustainable economic growth as shown in the flower diagram below. 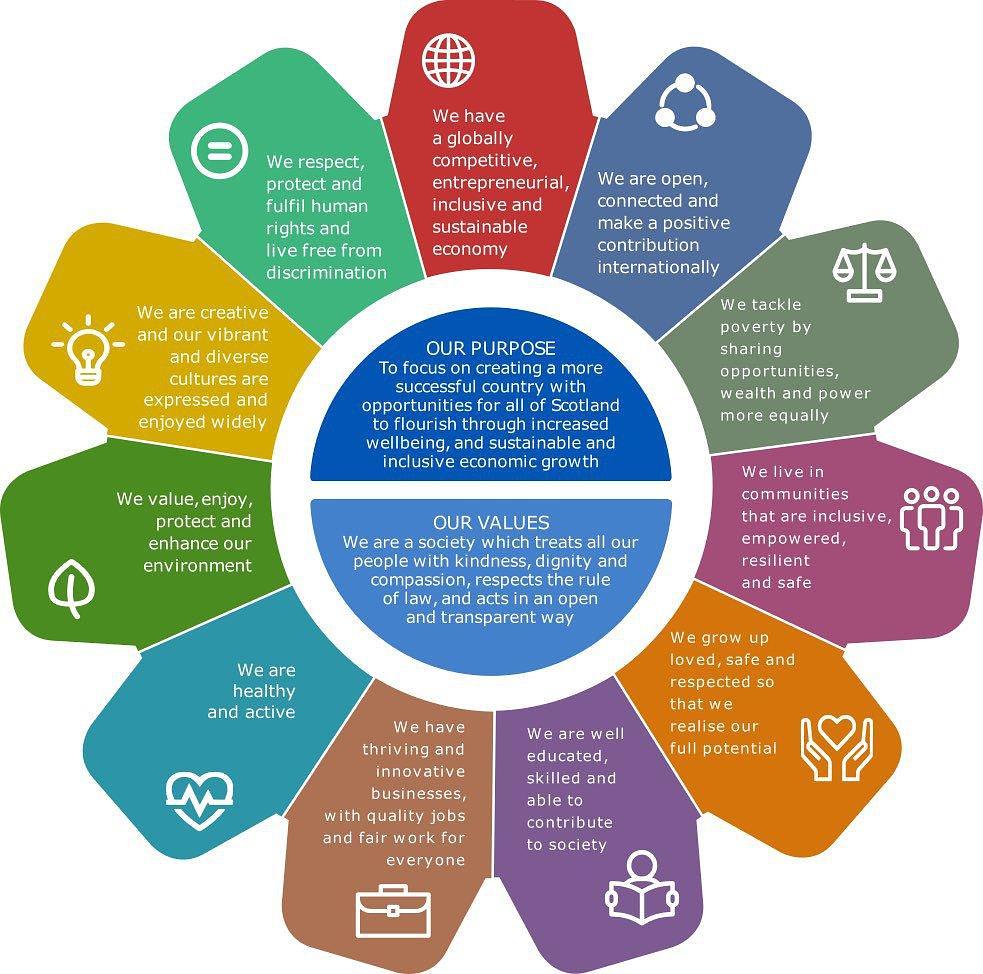 But what does it mean to have ‘citizens at the centre of AI’? Albert explained that AI risks ‘entrenching social inequalities and displacing human agencies’. Therefore, it is paramount that the government and companies use AI in an accountable way, leading to their citizen’s lives improving. The Scottish Government are already demonstrating their commitment to having citizen’s voices heard through the use of consultations and public engagement activities to inform the Strategy, which will be released in spring 2021.

We took a break in the session to ask people if they learned anything new from Albert and Jennifer- here are some of the responses: 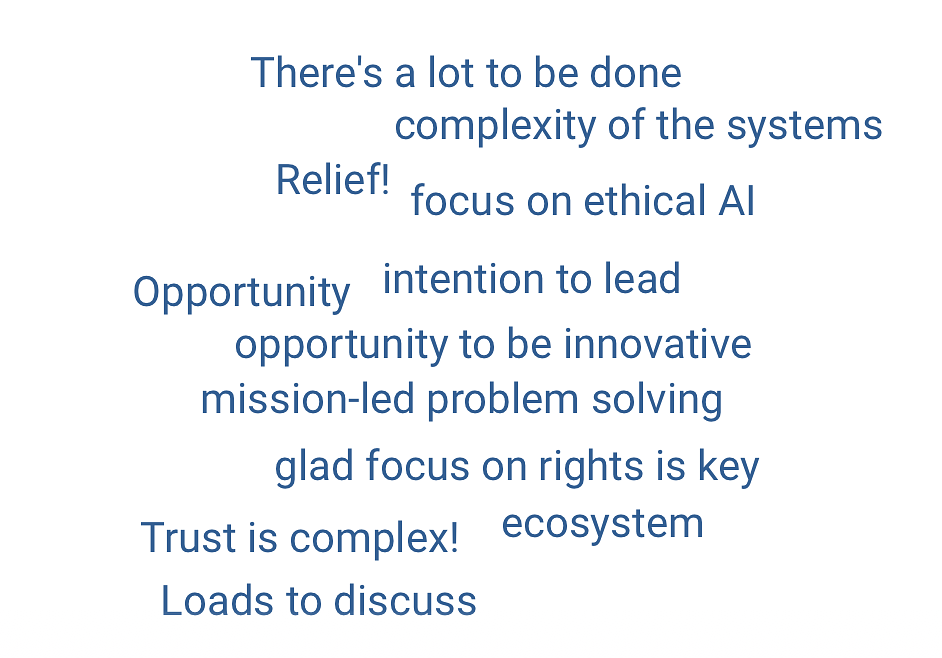 Whilst we have covered the policy and risks aspects of AI, what does it mean to have ‘AI for public good’? From the public engagement activities, Namita at Democratic Society, discovered that participants were optimistic about the potential of AI and aspired to Scotland becoming a global leader in the field. Building on Albert’s suggestion of ‘citizens at the centre of AI’ the participants also wanted ‘people not profit at the centre of AI’. For that to come to fruition, participants suggested that to negate bias in AI, it’s important to have a diversity of experiences and expertise developing AI. Another key theme was that AI should be accessible to all, especially those in rural areas. There was also a call for building a more positive narrative around AI (rather than the bleak narrative peddled by films and TV!). On the whole, it’s clear that citizens demand accountability and transparency from decision makers and leaders in the field as well as accessibility and fairness for a successful future of AI in Scotland.

The future of AI in Scotland

So we’ve learned that the future of AI could be both citizen-led and for public good - but how is this going to happen? The key to this could be education. In conversation with Namita, John discussed how citizen’s AI awareness needs to start at primary school and continue beyond the formal education system in order for the skillset of the workforce to remain high enough. AI has potential to augment the healthcare sector, revolutionise renewable energy and improve decision making. Scotland is already leading in the Fintech (financial technology), AI in healthcare, and data ethics sectors. During the working groups, Jennifer noted that the key to a successful future in AI starts with ‘clear leadership and citizen engagement’. The key features of Scotland’s AI ecosystem, which is an evidential diagram developed from the working groups (as demonstrated below), are that the ethical principles could be driven by societal good​ - these principles should be inclusive and diverse, dynamic​ and globally focused. 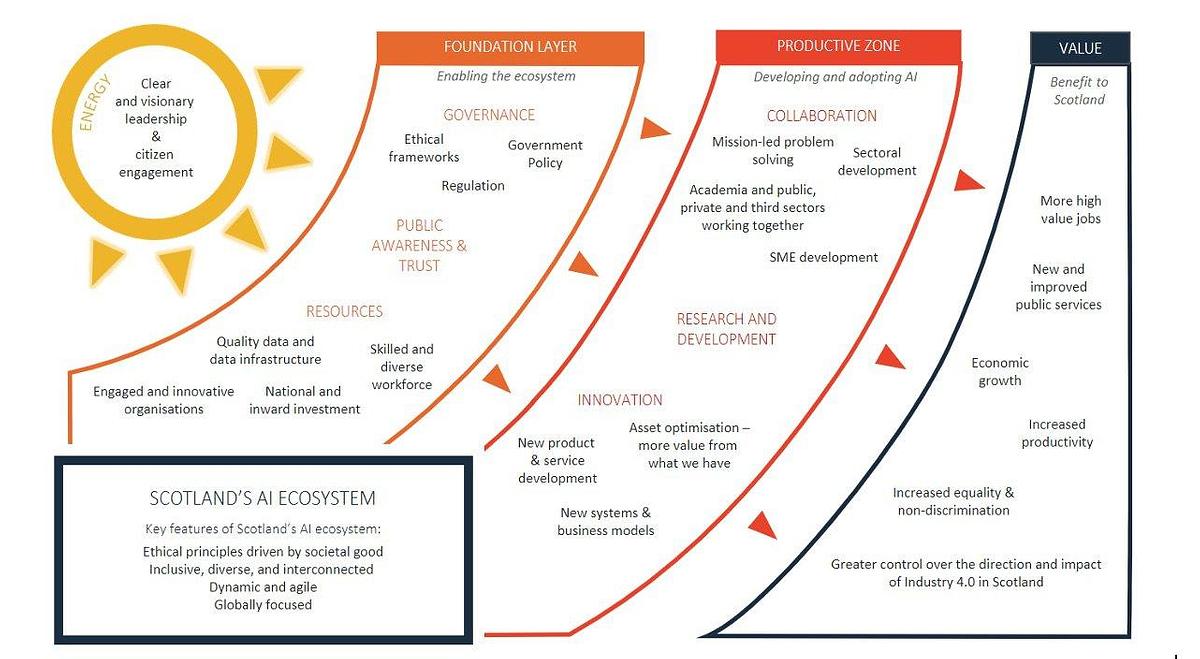 And lastly collaboration with other countries is also on the cards. The working groups had participation from across the UK and responses from across the world. By interacting with WEF, and working with countries that share our values, Scotland hopes to share and grow into a blossoming future of AI.

To conclude, the approach to developing Scotland’s AI Strategy has been a successful one with lots of positive engagement and valuable insights from experts in working groups, to the Scottish public, through to the attendees joining our panel event from across Scotland and parts of the US and Europe. Until the Strategy is released in Spring 2021, you can follow more updates on the Scotland AI Strategy website.