How do you start to make organisations more democratic? We spoke to community network organisers and leaders in third sector to hear how they distribute decision making and power dynamics within their spaces.

This Power at Work blog series explores how small-scale change can help shift the way power is distributed in the places we work. Drawing on interviews and analysis, below we share what may help enable conversations about power and decision making to happen. Here's some of what we've learned so far...

Power is taboo. Who has it - or doesn’t - can be a difficult issue for people to talk about, for many different reasons. Those in positions of power might not feel like they have as much power as others think they do, or might have hidden constraints. People might not want or know how to share power. Those not in positions of power might not feel confident challenging the status quo. And time and resource might be tight – making the time to explore difficult questions and address inequality within your organisation might take time away from your core purpose and business.

Even assuming people are comfortable openly discussing power in their group or organisation, the discussion can easily get stuck exploring philosophical questions like, “What is power? What are we talking about here?” Seeing, and understanding, the various ways power shows up - social, financial, experiential, through skills, though subject matter or institutional knowledge, through formal hierarchies or simply by being in spaces which others are absent from - can be a huge challenge in and of itself.

Rather than trying to untangle the whole picture all at once, which may lead to a confrontational approach, what we’ve learned is that these complex power dynamics within groups and organisations are just as dependent upon culture and emotions as they are upon formalised hierarchies. When seeking to change or redistribute power within organisations, how people feel and work together are fertile places to start.

“It's important to consider how individuals show up, particularly those in positions of greater power. There's a need to be comfortable with uncomfortable conversations, painful discussions in relation to decision making. Very personally affecting conversations need to happen, people need to be able to put egos to one side to listen and help others use their voice, and be willing to learn.”

So, what feelings and ways of working are we talking about here? What are some healthy enabling conditions for a more equitable distribution of power within their group or organisation? 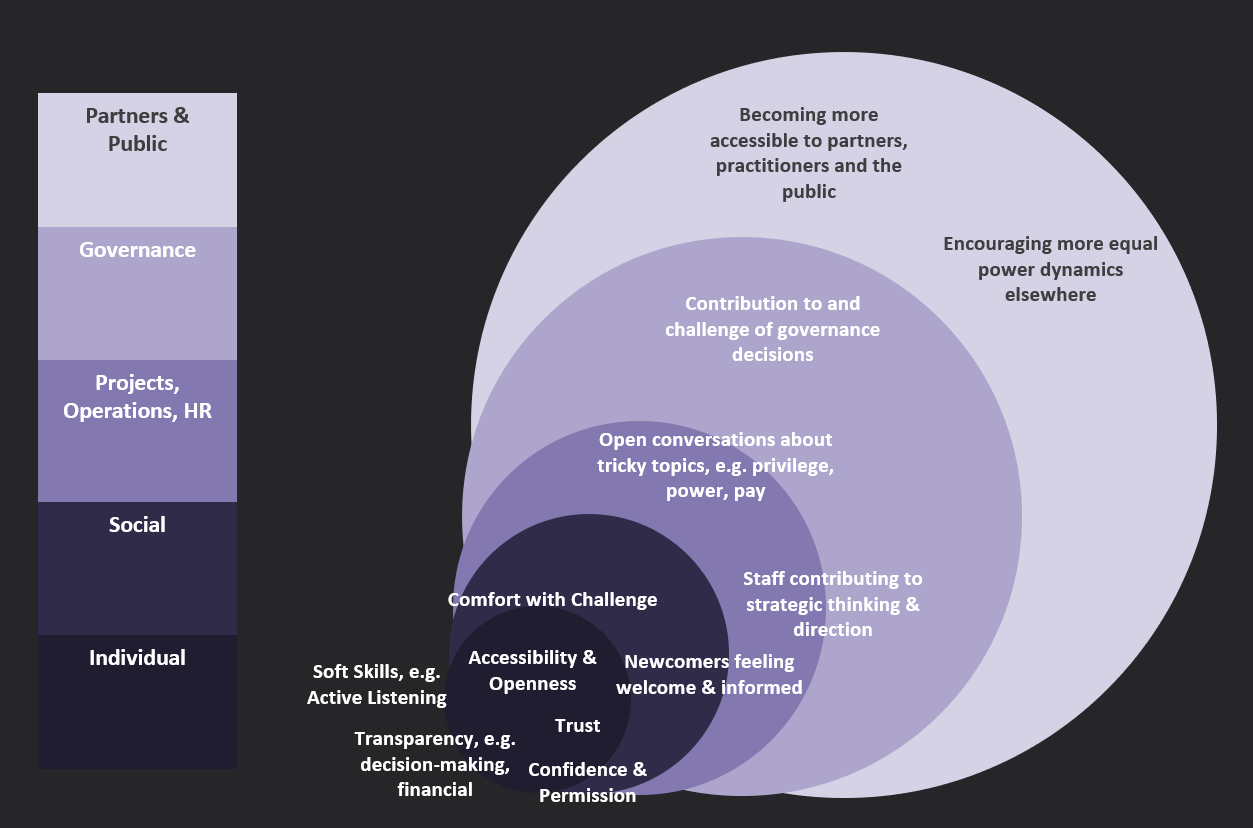 Feeling comfortable – or uncomfortable – played a big part in power dynamics for those we spoke to. Equitable discussions depend upon participants feeling comfortable to share their thoughts, ideas and experiences. However, such open and honest conversations might bring up things which make people uncomfortable - particularly for those who’re coordinating, holding and benefiting most from a group or organisations’ existence. For example, those who are paid to run organisations which work to address inequalities indirectly benefit from those inequalities existing.

What we found was that those at the heart of a group set the tone. When seeking to create a more equitable distribution of power in that group, those with the most power have a key role in holding an open space, not just during discussions or in meetings, but in their everyday work. Those with the most power might be long-serving, experienced volunteers, they might be founding members of a movement, or they might be a salaried employee of a community-facing network. They have relatively more power than newcomers to the group, through having time to contribute, social relationships with others in the group or institutional knowledge. This held true across the breadth of those we interviewed - big or small organisations, bounded groups with a clear idea of roles and responsibilities, or unbounded networks with porous membership.

These “enablers” will be responsible for inviting newcomers into spaces they might not have participated in before. They might have the power to decide who gets to take part in the space. To create more open and equitable spaces, they have to be comfortable with discomfort - comfortable being asked awkward questions or challenged about the position of relative privilege and power they occupy. All of this builds trust in the intention of the process and in the group, which at its best creates a positive feedback loop where members of a group can form stronger relationships and a sense of shared purpose.

So while enablers might have to be comfortable with discomfort in order to spread power more equally, the end goal of this is to grow the comfort of newcomers. The hope is to move away from an adversarial culture where disagreement results in the exclusion of others, and towards an environment where people feel comfortable sharing diverse and perhaps conflicting experiences and perspectives on issues. This helps enable questioning or critiquing of ideas and decisions to unlock greater honesty and accountability.

“Often you’d have a Board put a proposal together and not everybody feels confident and just agrees. We’ve tried to avoid this, and avoid setting up an environment where it has to be framed as a disagreement. We’re trying to create a more comfortable environment instead.”

It’s important to acknowledge that even among the most radically flat and non-hierarchical organisations we spoke to, power imbalances also existed. Attempting to distribute power more fairly and evenly across a group isn’t the only route to a healthier, more democratic working culture. Just as important are having the autonomy and responsibility required to take action, as well as the mechanisms for those with less power but who are affected by decisions to hold those in positions of power accountable.

Accountability, Honesty & Challenge in groups and organisations is the subject of our next blog.

What we did – methodology

Among this there was a great deal of variation in the size of the organisations and groups we spoke to, and the scale at which they operated. Some were hyper-local, while others were international. This brought an added level of depth and contrast to the findings, exposing difficult questions such as how to structure organisations around democratic and participatory principles at scale, and when hierarchy and exclusionary decision-making might be preferable.

This blog was written by Alex Zur-Clark. Interviews were conducted by Pandora Ellis and Alex Zur-Clark as part of Beyond the Rules, a partnership between Black Thrive Lambeth, Dark Matter Labs, Democratic Society, Lankelly Chase and York MCN exploring democracy beyond government.

Thank you to everybody who took part in the interviews and discussions which informed these blogs – Andrew Crosbie of Collective Impact Agency, Daria Cybulska of Wikimedia UK, Kelly Cunningham and Catherine Scott of York MCN, Matthew Bell of Plymouth Octopus, Melanie Nock of Co-Housing UK and many others who have chosen to remain anonymous. Thank you also to Annette Dharmi of Dark Matter Labs and Paola Pierri, Head of Design and Research at Democratic Society for reviewing and contributing to this analysis.