In 2020 and 2021, Democratic Society’s (Demsoc) team in France supported Orléans Métropole in designing and running their “Assises de la transition écologique”, a 5-month participatory forum that called upon its 300,000 residents to jointly design an ambitious roadmap to carbon neutrality. With more than 100 workshops bringing the Métropole’s residents together with city officials, public servants, civil society activists, and grassroots groups, the Assises was considered a milestone in harnessing citizens’ energy towards new forms of local climate democracy.

The co-creation of a School of Transition

The Assises’ design drew largely from the systems innovation approach shaped by Demsoc and our partners through the EIT Climate KIC Healthy and Clean Cities project in Orléans and 14 other cities across Europe. Its novel take on citizen participation for climate action inspired a Carnegie Europe working paper. Among other accolades, it was also awarded a 4-star “Trophée national de la participation et de la concertation” in 2022.

To keep this momentum growing, Orléans Métropole suggested that an in-house skills training programme be created and made available to all of Orléans Métropole’s 3,500 public servants, as well as the dozens of elected representatives and employees serving its 22 municipalities. Since its inception, the School was thus shaped as a way of reinforcing Orléans Métropole’s role as a local change-maker towards a sustainable model.

An approach based on knowledge sharing

Demsoc, together with French design agency Okoni, presented Orléans with a novel method to break silos and keep participation at the heart of this new phase: a co-design approach for and by the future students to invent a bespoke “School of transition”.

In collaboration with Orléans Métropole’s training and innovation teams, we ran two immersive collective intelligence sessions with a very diverse group of 30 public servants – bringing the voice of different competencies and levels of seniority to the table. The workshops were held on March 3rd and March 24th with facilitation by Mélodie Caraty and Raphaël Pouyé, with Okoni and Orléans’ team members.

The vast majority of public agents and elected representatives who had volunteered to join this exercise were new to these participatory methods based on candour, mutual trust, and experimenting. The trianings were received very well by all participants. 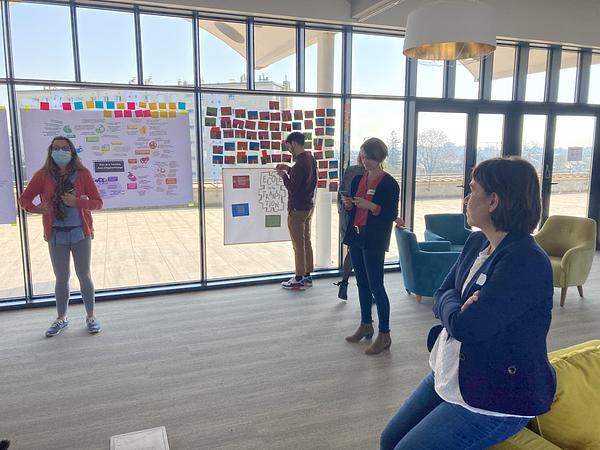 A new kind of school: Embracing a holistic view on climate to accelerate change

It soon became obvious to every “co-designer” present, i.e., all participants, that the School would break most existing habits in terms of public sector training, and would surely become a transformative journey for all involved. By ensuring that each new class produces and shares the knowledge and support materials for the next one, it sets itself a clear goal of encouraging agency and ownership of the school among all of its end-users across the Métropole.

By bringing together people who had seldom collaborated and having them uncover first-hand some hidden potentials of cross-silo cooperation on climate issues, the co-design sessions made everyone involved believe in the “School of Transition” as a new kind of space – one in which to experiment with all kinds of transitions. First, a managerial transformation, opening new areas for out-of-the-box hypotheses and real-life testing – but also, and much more broadly, a place in which to explore the social and governance transitions that can undergird the long-term transformations needed to face the climate challenge.

A starting point for Orléans Metropole to gradually identify its needs, these sessions confirmed that the School would focus on three challenges, namely (i) fostering the environmental transition, (ii) renewing relations with Orléans Métropole’s residents and citizens, and (iii) imagining new ways of working and doing business inside and outside of Orléans Métropole’s administration.

The 30 participants’ growing ownership of the School of Transition’s spirit has already made them future flag-bearers of its novel take on collective intelligence and cross-sector pollination. Most of them promised to become its tireless ambassadors, and to to form its first cohort.

Now that the workshops have produced the early building blocks for a new kind of school, its core concept and working principles will be polished by Orléans Métropole’s Training and Innovation directorates and will be presented for approval in June 2022.