This is a case study of the Orléans Métropole, a grouping of 22 local councils participating in the EIT Climate-KIC Healthy, Clean Cities Deep Demonstrations project.

Let's take a glimpse at how the EIT Climate-KIC Healthy, Clean Cities Deep Demonstration project is playing out in the Orléans Métropole. We'll look at the Métropole through the perspective of what mobilising factors are in place amongst the city leaders to encourage participation, the shifts that have taken place during the Deep Demonstrations, and finally, what the future holds for Orléans Métropole.

** Note: In April 2022 we released the second version of the Climate Democracy Model. Check it out, including newly available tools! **

What it was about

The Orléans Deep Demonstration objective was to assist the Métropole in developing a governance model that can take adequate climate action towards the Sustainable Energy and Climate Action Plan (SECAP). Adopted in 2019, the SECAP aims at an energy-positive territory with a 100% renewable energy supply by 2050.

A mix of actors types were involved in the Deep Demonstration, ranging across civil society, funders, companies, Métropole Government technical leads and politicians, and grassroots groups.

The "Assises de la transition écologique," or Assises for short, is a five-month participatory process in Orléans Métropole (OMET) designed to shape the metropolitan government's priorities for the next five years around climate action.

The Assises' main ambition is to accelerate the ecological transition towards a durable, dynamic, and resilient metropolitan area and bring to life a city-wide ecosystem meant to mobilise and engage with relevant stakeholders. The Assises process was launched officially on 12 January 2021.

Democratic Society has worked together with the Metropolitan Department of Environment and Risk Prevention (DEPR) in the foundational steps for the collaborative and iterative design of the Assises in Orléans and is now accompanying its implementation.

More than 100 events are scheduled to take place across the 22 local councils that make up the Orléans' metropolitan area over five months. They are dedicated to citizens, actors from civil society, and elected representatives in nine different themes identified in the SECAP, including food and sustainable agriculture, renewable energies, biodiversity, sustainable cities, waste reduction, circular economy, water resources and ecosystems, energy innovation, mobility, and flooding risk.

The aim of those events (such as workshops, webinars, online consultations, field visits, etc.), advertised as "Assises 'ON,'" is to identify concrete actions and solutions to be tested on the territory.

A trio is leading each of the themes. Each trio consists of one elected representative, one expert civil servant knowledgeable on the theme, and one civil society representative.

A Steering Group led by the Metropolitan Vice-Chair for the Assises (the Mayor of Orléans) and including six elected members of the metropolitan area have the task of agreeing to the strategic design and communication aspects of the Assises process and ensuring the coherence between the nine themes.

Aside from Assises 'ON,' any other civil society actors or groups of inhabitants are welcome to organise both interactive and deliberative events mobilising residents on climate-related issues in a series dubbed "Assises 'OFF.'"

The Assises, in this sense, provide a space for co-creation and co-production of ideas that can inspire policy-makers in the OMET area.

More information about the process itself and how to take part is available on the official Assises website.

Democratic Society has been looking at the city case studies through the eye of The City Canopy model, one of three core elements of our Democratic Climate Model. The green canopy covering the city represents how climate resilience has been built through Rooted Collaboration. The denser the canopy that covers a city, the more likely its structures and processes support Rooted Collaboration, shifting the city or region towards strengthened citizen participation and climate policy governance that will stand the test of time. The four sections of the canopy represent the elements needed to help a city in its climate resilience efforts: 1) Diversity of actors; 2) Participatory culture; 3) Subject matter expertise; 4) Resources. 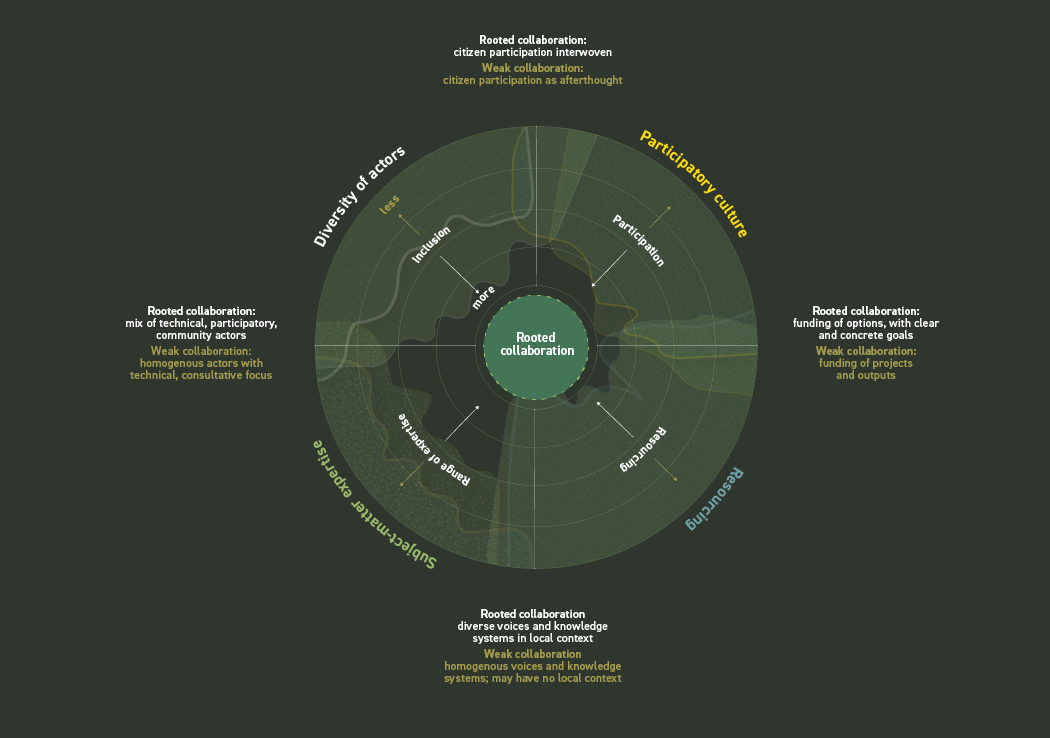 As you can see from Orléans Métropole canopy, the model also plots the foundational, mobilising factors, the emerging shifts observed from the Deep Demonstrations, and the scale of Opportunities that the future holds for the city to increase the density of their canopy for climate resilience. 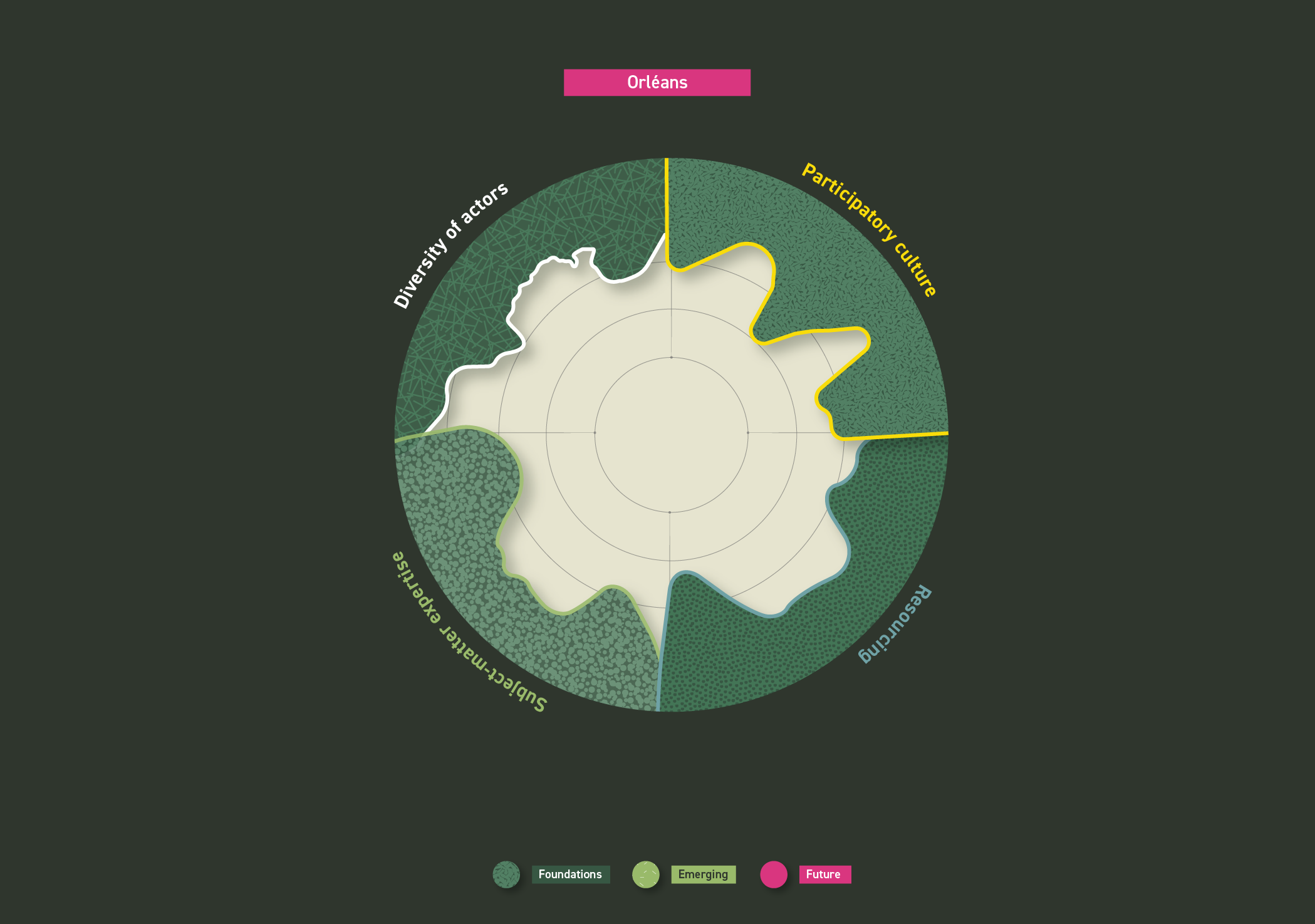 For Orléans Métropole, the ability to build trust and subsequent partnerships between the Democratic Society's Local Connectors and a core group of committed city leaders – particularly within the Métropole's Environment and Risk Prevention Department – was a tremendous mobilising factor. Subsequently, finding other allies to advance participation agendas and expansion of this core alliance laid the foundations for the shifts to come.

For more on allies and actors for climate action, read about the Actor Framework in our Democratic Climate Model.

We should also mention the recognition project partners received, particularly as a mobilising factor. In Orléans Métropole, Democratic Society was seen as a neutral actor that could bring international experience and credibility from previous work. With this experience came the ability to humbly facilitate dialogue and design a space where diverse voices were heard. 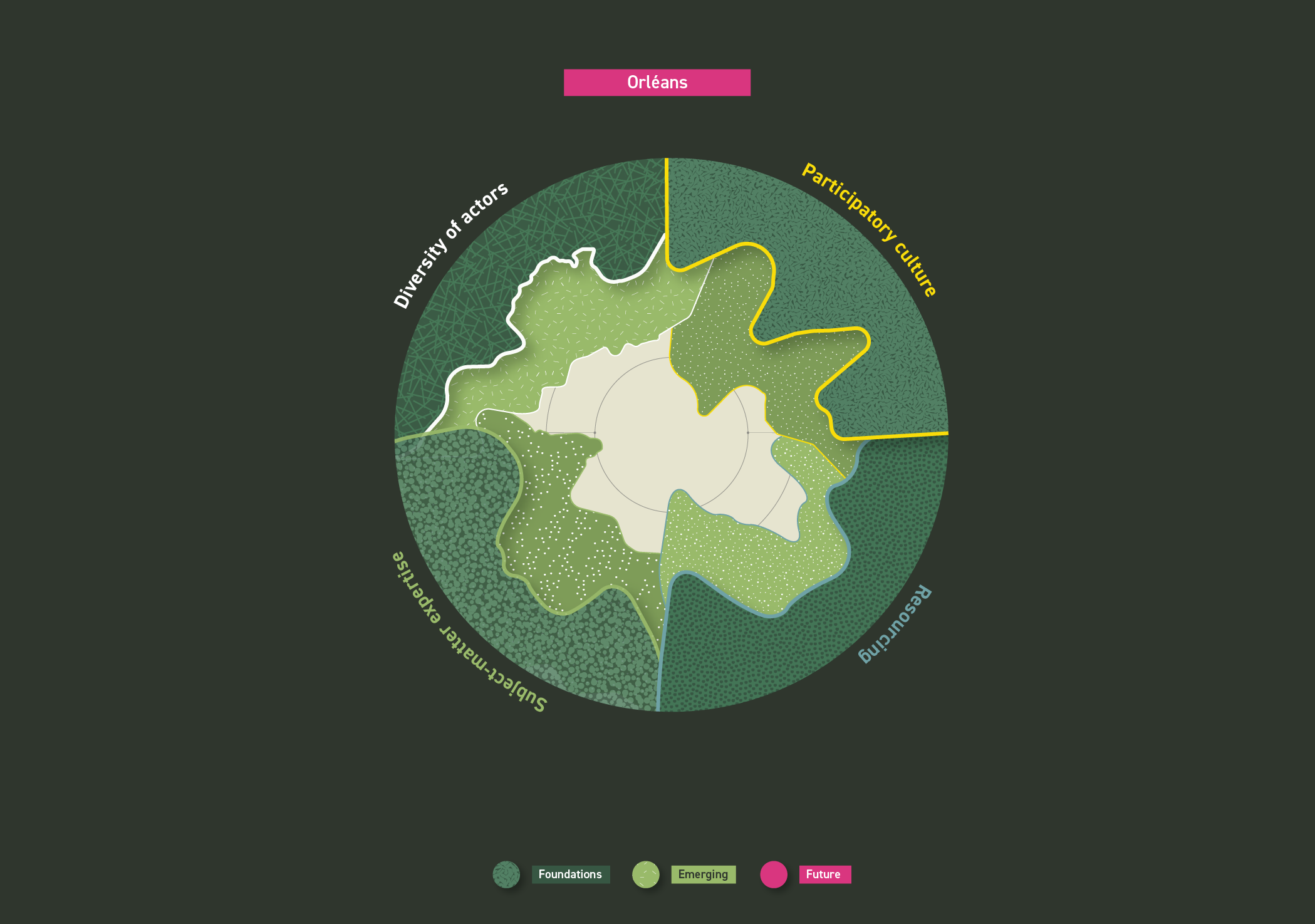 The Orléans Métropole is growing its participatory culture, attempting to shift to a state where the public, civil society, and individual citizens can be seen working together, leveraging each other's knowledge and experiences to develop a transition governance approach to a complex challenge such as climate change.

The future of climate democracy in Orléans Métropole is one filled with opportunity. While significant shifts have already taken place in preparation for this new process, there is still room for continual improvement.

For Orléans Métropole, the future looks to strengthen the cooperation processes between the Métropole and its engaged citizens through the Assises, which should, in turn, bolster community groups' trust in the local government. More attention, however, could be given to address the concerns civil society groups have regarding the pre-selected nature of the issues that the Assises process discusses.

Like most cities involved in the project, the next steps of making the cooperation real gravitate around rethinking the relationship between citizens and institutions, i.e., putting an end to citizens' consumption of public action/services. For Orléans, this can come about by designing a participatory strategy that established a more long-term and ongoing dialogue process.

How strengthening governance, participation and civil society can unlock climate resilience in cities and regions, now and for future generations. An introduction to our Democratic Climate Model, based on our Deep Demonstration learnings.

How can we make climate change a democratic issue, not a technocratic one? We are helping European cities to put people at the centre of Europe's ambitious climate transformation.

The Healthy, Clean Cities Deep Demonstrations project was financially supported by EIT Climate-KIC. Democratic Society worked as the design partners within the project consortium with Dark Matter Labs, Bankers Without Boundaries, and Material Economics to inspire 14 cities with new ways of imagining, trialing, and learning to work towards a just transition. The project was carried out by an extensive team at Democratic Society, which included Local Connectors in all 14 of the participating cities.

Illustrations by Orlagh O'Brien. Photo by Hugo Delauney from Unsplash.