Reflections on internal democracy in organisations

When thinking about democracy, what spontaneously comes to mind is probably something connected with governments, society, national or international agreements. Democracy and participation instead have multiple dimensions: from society as a whole, to institutions, organisations and even individuals (because sometimes we need some internal democratic processes to make sense of the different parts we have inside!). We cannot build a democratic culture on one of those levels if we do not take into account the others: they are interdependent and mutually reinforcing. By practising democracy at different levels at the same time we can foster a deeper, more systemic democratic and participatory culture.

While tools and methodologies might be different, purpose and principles are fundamentally the same:

At Demsoc we are currently testing out how we as an organisation can better put purpose in principles into practice. A good example is our staff representation selection process, which took place in the first half of 2022.

Democratic Society is growing. The days in which we all fit on the same table are long over, and when we choose to meet, we not only have to take long bus and train rides, but also need an event space to fit all of us.

Along with size, comes the need for different structures and ways of ensuring that everyone in our organisation is well-informed and heard. This is why in the beginning of the year, Demsoc decided to select staff representatives, to ensure staff voices are represented and heard in all important decisions in our organisation. To decide who should be our first staff reps we set up an internal working group and collaboratively designed a two phase process based on sociocratic principles.

The past months were a great experience, and we learned a lot - as process designers, facilitators, participants and also as colleagues. In this blog post we would like to share three things:

Demsoc staff rep selection process was designed around sociocratic principles. Sociocracy is about coming up with proposals and making decisions together, it’s transparent and inclusive decision-making that helps the people taking part to get to know each other, influence each other and learn together. 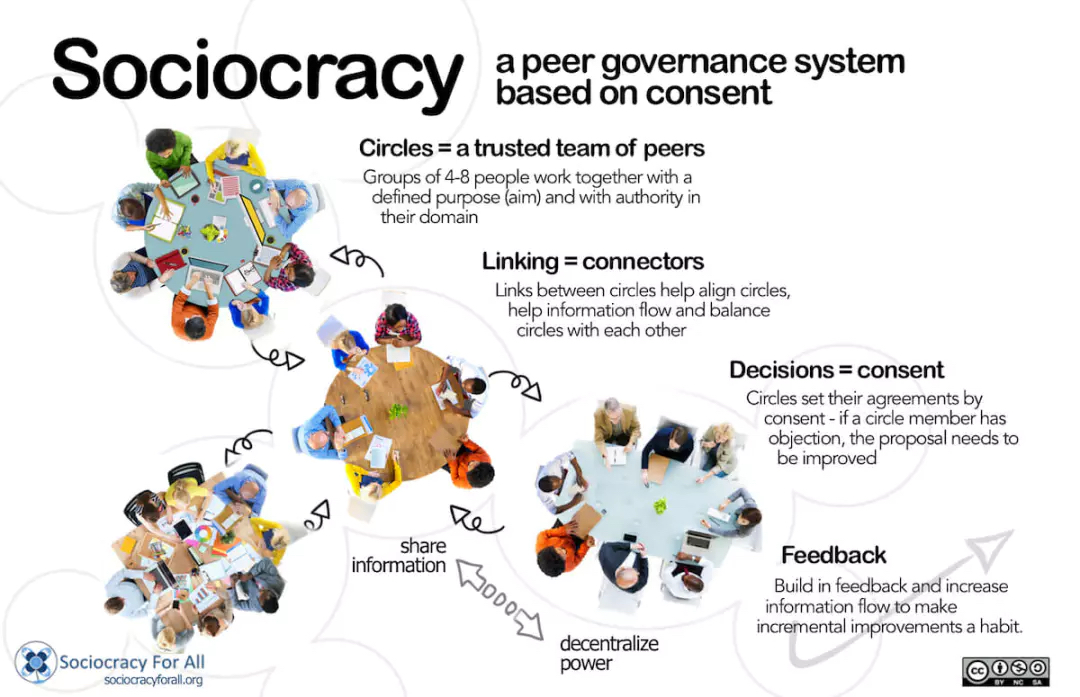 We adapted the sociocratic selection process (elections without candidates) to fit the very specific needs and characteristics of our team.

Sociocratic processes are ideally run in-person, with all involved in the same place at the same time. But with short timeframes and existing commitments, we had to run the process online. This posed some challenges and trade-offs for creating a transparent, inclusive decision-making process, with important differences in how we ran this process.

The process ran for around four months, from February to June 2022. Co-creation of the staff role description took place over February to May, with process design from April to May, and facilitated deliberation over May and June.

The first phase of deliberative sessions lasted about 2 hours each, with four main steps:

The second group phase had a group made up of people who were nominated by staff in the first phase. This followed the same methodology as above, with one significant difference - this time the group were asked to nominate four of the nominees present to be the final Staff Representatives. Nominating four people meant the group had to consider the balance and diversity of the final group. Each participant’s proposal was noted, and votes and justifications for each person were recorded in an online document which was visible to the group. As in the first phase, the facilitator then made a proposal and the group discussed objections until they found a proposal they were comfortable enough with. The group decided on four Staff Representatives as well as an additional role focused on learning and guiding these new roles.

The role of organisations in democracy

This building of a democratic and participatory culture at all levels, is not just speculative theory or words on a manifesto: there are very concrete manifestations of collaboration and democracy that we can practice in any organisation:

All this might be scary and daunting at the beginning, as it requires time, effort and commitment to build a culture of participation, transparency and honest communication. It might also imply going through somme uncomfortable times, as old mindsets and behaviours are challenged and eventually transformed. The good news is that, once we start, we are creating momentum and self reinforcing loops: the more we practise an internal culture of democracy, the more people will learn how to do it and will challenge their belief systems and habits, which in turn will make it easier to integrate a more democratic culture.

You might be also interested in reading Learnings from practising internal democracy at Demsoc where we share our learnings from the internal staff representation selection process.

Further projects & readings on this

Going beyond the Rules